Looking back now on the night of that party, I only wish things turned out as optimistically as I thought they would. The whole evening was spent just drinking in that primal fire. Things had been rocky recently for me thanks to that day at the maze, but there I was with my friends and dancing with not one, but two beautiful women. Not my usual position, I might add.

Hell, my last real date before Windenburg was my date with Agnes Seabottom. The woman who not only turned out to be wanted by the police, but who also stole my credit card information and charged a $6,000 mattress to it.

But unwanted mattress criminals aside, there I was. Dancing between Penny and Lily until the black of night gave way to the rosy colored fingers of Dawn. But as the sun returned that next morning, so too did my misfortunes. In the space of a single night I had gotten to know Penny better than I knew most people. Internet celebrity. Beautiful sense of humor. Online tournament gamer. Hopeful romantic. Gorgeous. I was surprised when she invited me over to her place later that day for lunch. I expected the life of an internet celebrity to be glamorous. Always busy fighting off crowds of fans, getting free merch from hundreds of different sponsors, being not quite rich, but more than comfortable. I was pleasantly surprised to find that the glamour of Penny’s life wouldn’t be too incongruous with my life lived under nothing by a thin black net and the stars. My false sense of comfort with the harmony between my life and Penny’s, coupled with the early morning we spent getting to know each other, had led me to do that one thing that givers-of-unsolicited-advice had always told me to do: drop my guard.

In that moment it seemed the best thing to do: being genuinely myself with someone, opening up about the fact that I felt like I knew Penny for longer than a few weeks, and expressing my admiration for the person I had come to know. Except I realize now that, in addition to all those things I had learned about Penny that morning, Penny also was just nice. And what I had interpreted as the beginning of something (hell, I was even wondering how her internet career could fit into my backwoods lifestyle), was just that outgoing personality of Penny that touched so many people and made her the well-loved woman she was.

Embarrassment drained into my face, and I made some excuse about my tent getting caught up in a windstorm. When I had reached a few streets away from Penny’s place, the heat in my face was no longer from embarrassment, but anger. Not at Penny. I don’t buy that friend-zone bullshit, she owed me nothing. But at myself. If that awkward monster who lived inside me had ever taught me something, it was never read into anything. Over the next few weeks I focused on gardening at the Lot, while adding Penny to my dodge-at-the-gym list along with all the bros who took their workout regimens too seriously. I just knew I had ruined our friendship and didn’t want to force the burden of pretending to be nice onto her shoulders.

During these weeks I had spent a few friendly nights with Lily, but I found that friendly was the only adjective I wanted to describe our nights. There was something unseen between us. A thick fog that not only prevent me from seeing clearly, but also prevented me from wanting to know what was out there. After a few weeks of wading through this fog, I realized what exactly was causing it and I was determined to stop it. One way or another. Lily invited me over to her house one afternoon for coffee before the Gnomes met up at the park. And I just asked her “What happened? What happened that day at the maze?”

For I realized that no matter how much Lily tried to downplay the events of that day, no matter how much she comforted me, and soothed the anxiety that plagued my mind, it would always come back. It was a shallow wound that continued to hurt after all this time.

Lily tried to escape the question with the usual “It doesn’t matter. It’s over. We’re here now” answers. But I was determined. The longer she delayed, the worse I knew the answer had to be. 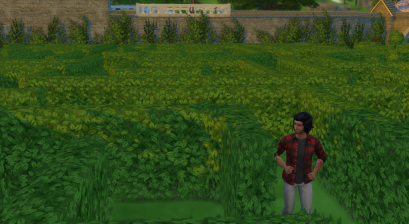 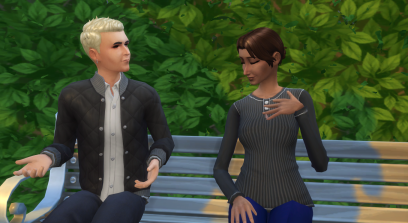 Lily tried to explain in her usual shrugging way that she was devoutly non-committal. It wasn’t about me – it was about her. Wolfgang had been an adventure, and she went into the maze looking for just that. Perhaps she could shrug something like that off, but I couldn’t. I stormed out without uttering a single word and I hid. Not just from Penny and Lily. But from Wolfgang, and even Gunther (who I later found out were brothers), from the gym, and from the Gnomes. In short, from the world.

I wrapped my world in that waterproof canvas and hibernated. But spring comes and all hibernating creatures wake up and return to the world.

This time it was the smell of coffee that lured me out of my winter slumber. I started frequenting the coffee shop in town again. Sometimes meeting Gunther for a quick chat and espresso before realizing that was all I could tolerate for the day.

Soon, however, the inevitable happened.

In a tiny town like Windenburg there are no secrets and no one can can be ignored for too long.

I heard a light voice calling my name from outside the library as I approached the coffee shop. I stopped and waited a fraction of a second before turning to see who it was. Although small towns have no secrets, apparently hiding yourself on an abandoned lot for months can still produce some surprises. I turned to see Penny. A perfectly pregnant Penny calling my name. My shock must have been pretty apparent on my face as Penny started laughing as soon as I turned around.

She explained that yes, she was pregnant. The result of a short-lived relationship that had soured shortly after some failed birth control had scared the father away.

And now that that was out of the way, she said, “where the hell have you been?” I sheepishly fought around the truth to tell Penny that my nights as a cheap-lounge musician were making it impossible for me to do anything but sleep, play violin, and repeat. But Penny suspected something more.

“I haven’t heard from you since that day of that party. Despite my best efforts to reach you!”

It was true, during my hibernation I had disconnected from the modern world completely by destroying my phone. The destruction of that small device holding large implications for what it meant to be “off the grid.”

“I’ve just been really busy. Really.” I added unconvincing to even myself.

“Well don’t let it happen again! Get un-busy!” She said and opened her arms for a hug.